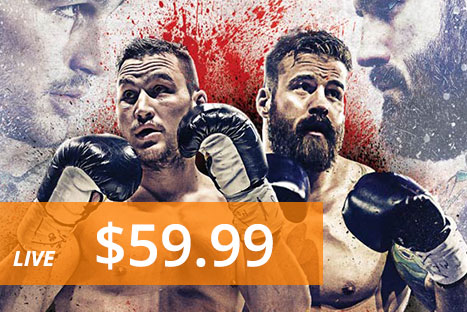 Eye of the Tiger Management and Shawinigan’s Cataractes will fulfill boxing fans’ wishes by presenting the most anticipated duel of the year on the Canadian stage, while Trois-Rivières Olympian Simon Kean (14-0, 13 K.-O .) will face British-Columbian slugger Adam Braidwood (12-1, 11 KOs). The event, which will be presented in association with Videotron, Mise-o-jeu and KO Boxing, will take place on Saturday, June 16 at the Gervais Auto Center in Shawinigan and will be broadcast on pay-per-view television at 7:00 pm.

Born from a very real rivalry between the two colossal Canadians who have fought a merciless war on social networks for a few months, the duel will certainly be the most explosive. For EOTTM President Camille Estephan, he has all the potential to win the title of the year in the country: “These are two incredible athletes, at the top of their fitness, who maintain a very palpable animosity and will give everything in the ring to demonstrate that they belong to the top of the boxing queen division. We are very excited to offer fans this fight that they have been asking us for more than a year, and this, at Simon Kean in Mauricie. In the semi-final of the evening, Yves Ulysse Jr., who delivered an outstanding performance on HBO in December, will attempt to climb into the top 5 worldwide of the WBC in light supers. All the ingredients are there to guarantee an unforgettable evening! “

Simon Kean was very excited about the idea of ​​finally closing the Braidwood file and intends to do so convincingly: “Do not expect the June 16 fight to end quickly. I want to torture Braidwood for 12 long and painful rounds, and finally send him to the rug at the very end. I want him to pay dearly for everything he has said about me in the last few months. I will be ruthless, “stresses Simon Kean harshly.

Since his striking victory by KO. facing Eric Martel Bahoéli in February 2017, Adam Braidwood is on a mission: he wants to dethrone Simon Kean from his position at the top of the Canadian heavyweight classification. “Simon complains that he has not really experienced adversity so far among professionals. I guarantee you it will be different on June 16th when he will finally have a real test. We’ll see if he can really cash in the shots, and we’ll see if he’s as promising as we’re told, “says Adam Braidwood. ” Do not mistake yourself. I was not particularly fit and had little training before getting into the ring against Eric Martel-Bahoéli. This time, I am extremely motivated and work hard at the gym. Simon will have a good strategy if he wants to get away with it. “

The full program of the event, which will also feature Yves Ulysse Junior, Ablai Khussainov, Nurzat Sabirov, Sadriddin Akhmedov, Francois Pratte and more will be unveiled in the coming days. For more information, visit www.eottm.com.

FIGHT CARD OF THE NIGHT